Alexandra van de Kamp, a native of the state of New York, has recently moved to San Antonio, Texas. She has been published in numerous journals nationwide, such as: The Cincinnati Review, River Styx, Meridian, Lake Effect, The Denver Quarterly, 32Poems, Court Green, and The Connecticut Review.  Her full-length collection of poems, The Park of Upside-Down Chairs, was published by CW Books in 2010, and her chapbook, Dear Jean Seberg (2011), won the 2010 Burnside Review Chapbook Contest, which was judged by Matthew Dickman.  A new chapbook, A Liquid Bird inside the Night, is forthcoming in 2015 from Red Glass Books. For six years she lived in Madrid, Spain, where she co-founded and edited the bilingual journal, Terra Incognita.  You may see more of her poetry and prose at her website: www.alexandravandekamp.blogspot.com.

Diana Raab: Your poems have a lot of powerful visuals and movement. Where do you get your inspiration for these great poems of various styles?

Alexandra van de Kamp: I always have a hard time answering this question because I think of my poetic sources as always varying.

The poems in this book span 8-10 years of writing since it was my first full-length collection published, so I see it as an “umbrella” collection—one that holds under its roof several different phases in my writing life. I tend to think of myself as a poet of atmosphere or mood, so I find myself influenced by weather and light a lot. As a result, I have poems that started off merely because of how I felt locked inside a snowy day.

This is one reason why I am also drawn to writing about paintings. Certain textures, color palettes and atmospheres in a painting can really captivate me.

My series “Winter Landscape” that comprises one section of The Park of Upside-Down Chairs came about because I found myself one afternoon at the Thyssen Bornemisza in an exhibition called The Golden Age of Dutch Landscape Painting. I was

living in Madrid, Spain at the time and was exploring each of the city’s museums, one after the other.

I was especially taken by this one exhibit of paintings because I felt enclosed, just by standing there, in the colors, textures and moods of each landscape and, I wanted to capture that sensation in a poem.

It was the first time I realized I didn’t have to write purely about myself but could get lost in other realities through my poems. If I were not a poet, I would have become a painter, so the visual is very much a jumping off point for me. Nothing can’t be in a poem, so I think by just letting myself watch what is occurring around me in a certain slow, unflinching way, I can come up with poems, and these are often poems reliant on a visual spark.

DR: You make many references to the natural world. What is the role of nature in your life?

AV: I actually do not think of myself as a nature poet although you are right to point it out since I do write about trees, clouds, Dutch Landscapes, etc…. If I were to put myself into a poetic category, I would think of myself more as an Ekphrastic or meditative poet—one who writes about works of art or who is busy trying to find larger connections between everyday episodes and events.

And the works of art that I am drawn to are often landscapes, still-lifes or city scenes—subject matters packed with physicality and texture.

For example, I wrote a prose poem called “Daguerreotypes” because of an exhibit I saw at The Metropolitan Museum of Art. What fascinated me about this exhibit were the colors and textures of the early (and sometimes failed) attempts at photography.

Early cameras, because of their slow shutter speed, were really poor at capturing movement, so a lot of the earlier photographs blur the image that is too fast for them; as a result, people are harder to grasp than, let’s say, a tree or statue. This limited range of early photography created a ghostly atmosphere and smudged appearance to Parisian street scenes or interiors of cathedrals that I found fascinating.

These are the kinds of processes I can get preoccupied by—ones that are engaged in trying to capture the outside world in its various forms and patterns, and I am interested in how those forms and patterns interact with who we are.

DR: With all your references to the natural world have you ever thought of or written Haiku?

AV:I have not really attempted Haiku. I find that to be such a challenging poetic form to do really well—that distilled essence of a moment or a juxtaposition of observations–that I tend to leave that form to those who are the real experts and have perfected their own version of the Haiku, such as Matsuo Basho.

I have to admit, though, that when a poet has written a truly compelling Haiku, it can knock my socks off. I also consider myself more baroque in tendencies than a writer of Haikus ought to be.

DR: What inspired the title of your book and your title poem?

AV: I lived in Long Island for nine years. In fact, I have just moved from there to San Antonio, TX, and I often rode the Long Island 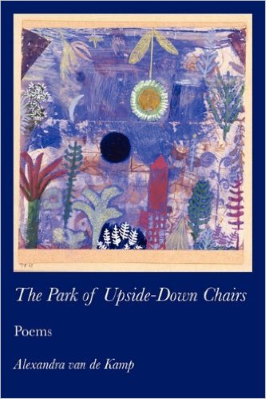 One snowy day on the train, I looked out the window and saw a deserted lot with a ring of 5-6 chairs—each blown over—and it gave birth to the poem “The Park of Upside-Down Chairs.” I had fun imagining what had previously happened in this space to have caused the chairs to be blown or knocked over.

I also liked the idea of a strange “park” being the title of my book because I wanted to encourage the idea of a poetry collection being a space a reader could stroll through, but an unexpected space.

DR: I loved so many of your poems, especially the landscape poems, but my favorite poem, which I feel represents the essence of your book, is “A Place Beyond Objects.” In this poem you ask what is a world without objects? How do you see the connection between objects and materialism?

AV:I wrote this poem more as a meditation on our relationship to the physical world around us. I like to write about things we can take for granted in our everyday worlds, and I realized how much, at times, we can take our furniture for granted. Therefore, I decided to play with the idea of the consciousness of objects. What would their awareness be like compared to our human perceptions of the world or of ourselves?

So I wrote this poem exploring our personal possessions’ “take” on us. As a result, the poem has lines and questions, such as: “Think of the loyalty of floors and doorways,/bedspreads and lampshades. You are the blur in their world,/what they must always encounter—the trespasser/flitting among their corners…”.

I think I was enjoying depicting our furniture and belongings as a bit fed up with us and our restlessness, our inability to stay still. It was an attempt to have the reader re-consider him or herself as maybe not the total center of his personal world. You could say that this is a materialistic poem because I am celebrating objects, but not the idea of an over-consumption of objects, just the idea that we should recognize what spends time alongside us in the world, and, often, that is simply your bookshelf or nightstand.

DR: Which poets inspire your own work?

AV: There are so many poets that have fed me and inspired me over the years. Theodore Roethke and James Wright were two poets that taught me a lot when I first began to write steadily. Their exquisite eye for imagery and Roethke’s lush music showed me how to sing on the page, so to speak. I also loved Wright’s vulnerable honesty in his poems. I love Elizabeth Bishop’s work as well and the exotic moments or predicaments she creates on the page.

More contemporary poets, such as Hailey Leithauser, are also very interesting for me. Her first book Swoop reads almost like a romp through the syllables and vowels of the English language because she lets sound so much dictate the logic and unabashed humor of her poems. There is a lovely mischievousness to her poems.
I also admire Janet Kaplan, who has done wonderful things with the prose poem and can weave a deft darkness into even her more comic pieces, which are chock-full of uncanny, quirky images. The same goes for Laurie Blauner, who has a new book of prose poems, It Looks Worse than I Am, recently out by What Book Press. I am really enjoying the imaginative, strange perspectives she is evoking on the page.

I also admire Simone Muench’s work as well as that of Mary Szybist, to name just a few. There are so many talented, imaginative contemporary poets these days that I am always discovering new voices to relish and delve into.

Read some of Alexandra’s poems online:

Order your copy of her book from Amazon.